How to Choose the Right European Mortise Lock?

The Function of European mortise lock

The mortise lock is generally used on the security door, suitable for general commercial and heavy industrial use. The D&D range of architectural locks is manufactured to the highest engineering standards and designed to offer a high price/performance ratio. They have been successfully type tested to all the requirements of BS EN12209. The following describes the various types of European mortise locks and the safety features that should be considered.

In a complete door lock, the lock cylinder controls the operation of the mortise lock, and the mortise lock is responsible for opening and locking the door, which plays an important role in security. The square tongue and the oblique tongue play the most critical role.

The latch - the protruding part of the mortise lock, the rearward compensation of the reset spring, and the door is buckled when the door is closed, so that the door stays in the closed state. 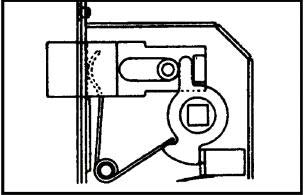 The dead bolt- mortise lock can be telescoped like a part of the bolt, and can be rotated by the hand wheel or key of the lock cylinder to shrink the square tongue.

When the door is closed, the oblique tongue buckles the door. Just turn the hand wheel or the lock core to unscrew the bolt from the mortise lock, and the door can be locked to meet the security requirements.

Through the operating principle of the known mortise lock, we can choose the mortise lock according to the type of the door.

The fire sash lock - latch can be manipulated by the handle on either side. The bolt that is thrown and retracted from one or both sides, depending on the type of cylinder installed. The cylinder action will operate both the bolt and the latch. The latch is 2 turns. The door handles are active at any time. The lock cylinder can drive the oblique tongue.

The fire mortise lock installed in the fire door must pass the fire test and be CE certified.

For example, the D&D CE mark European mortise lock has been successfully tested to comply with all requirements of the BS EN 12209/ DIN 18251. 11 classifications: 3X910G3BC20. 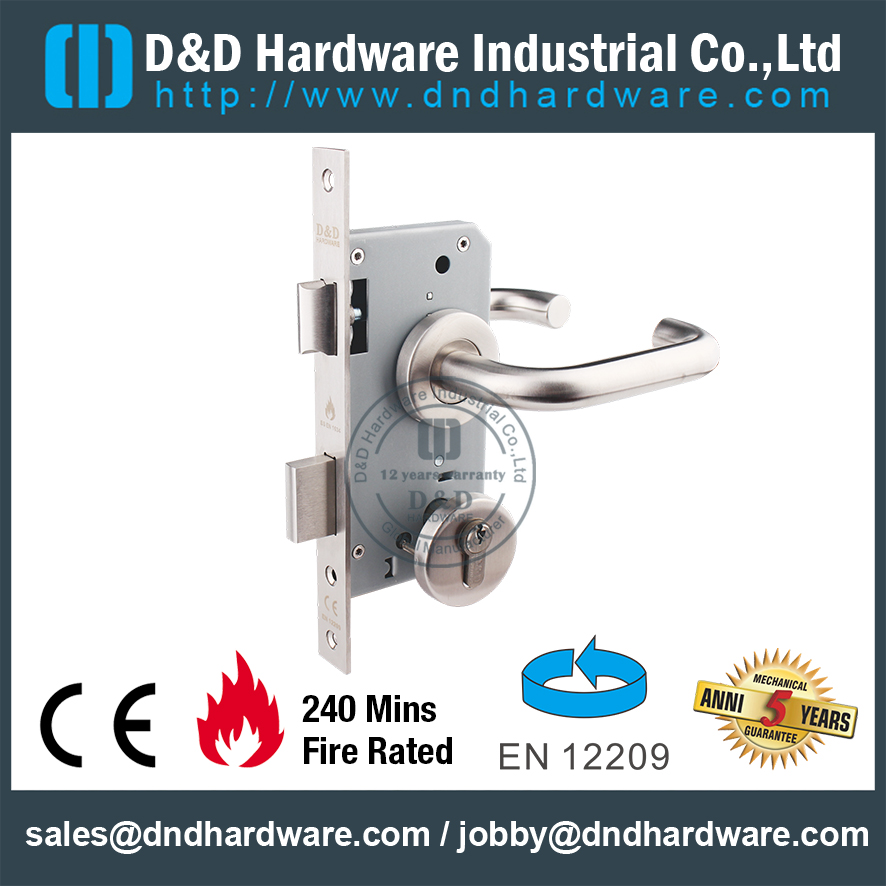 The fire rated latch lock- latch can always be operated with the handles on the left and right sides. 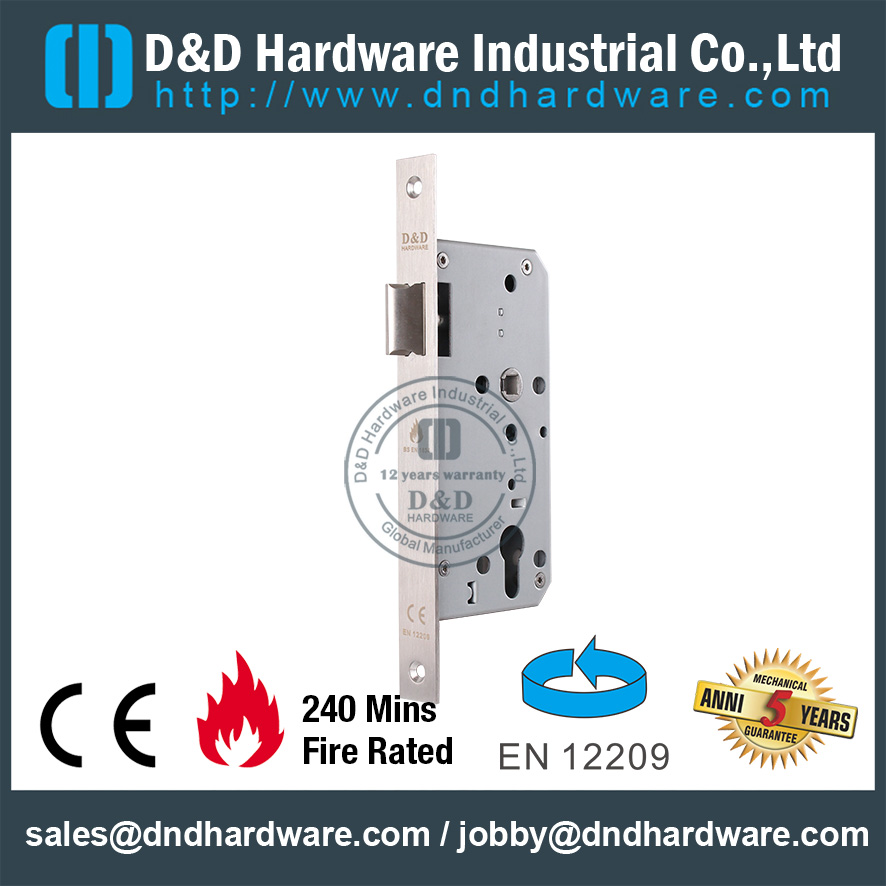 The emergency escape lock - it with quick turn-on. The internal lever/emergency outlet unit simultaneously springs the latch bolts and bolts in one action, allowing quick escape for fire and safety reasons, for doors that require a single escape and high safety. 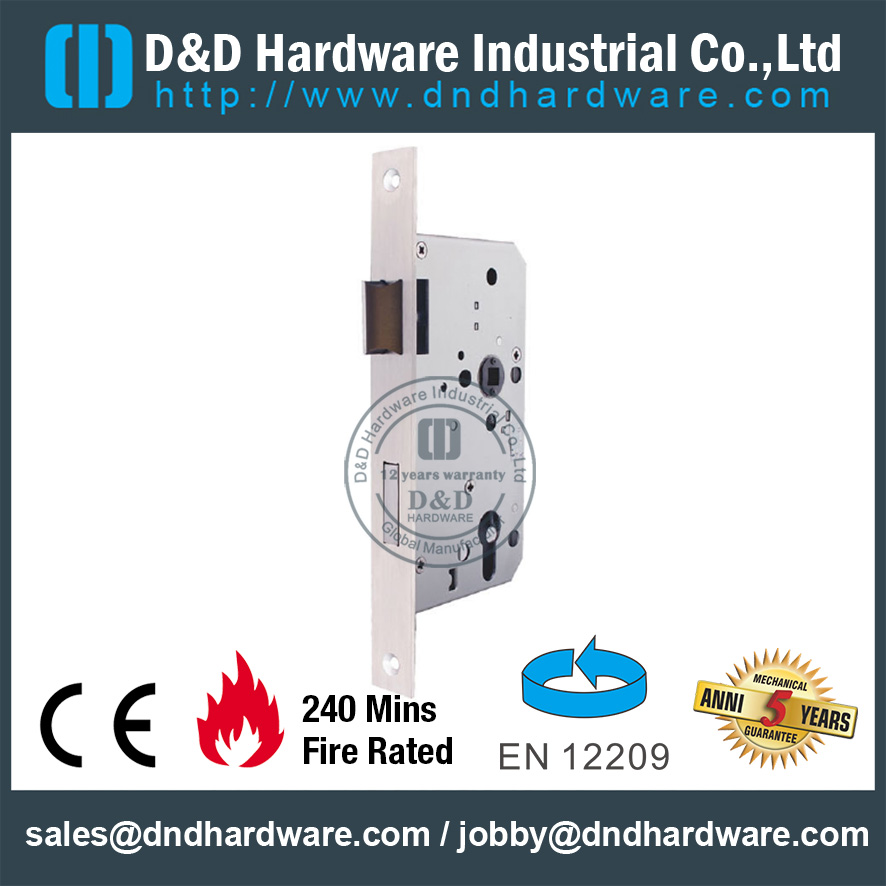 A deadbolt lock – Deadbolt thrown and retracted from one side or from both sides, depending on the type of cylinder installed. Deadbolt 2 turns. Suitable for storeroom door, wooden doors, metal doors, fire doors, smoke doors and so on. 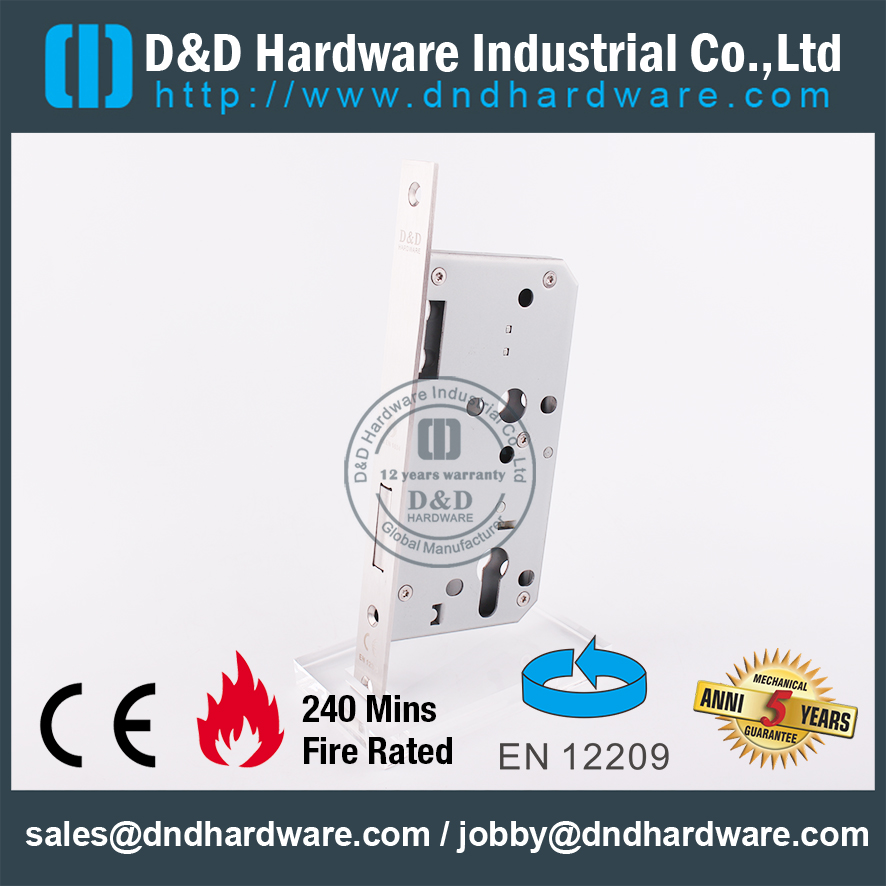 The bathroom lock -  Latchbolt operated by the levers on either side. The Deadbolt is thrown by the internal thumb rotation. An indicator with an emergency release can be installed on the  outside of the door and operates in conjunction with the thumbturn. 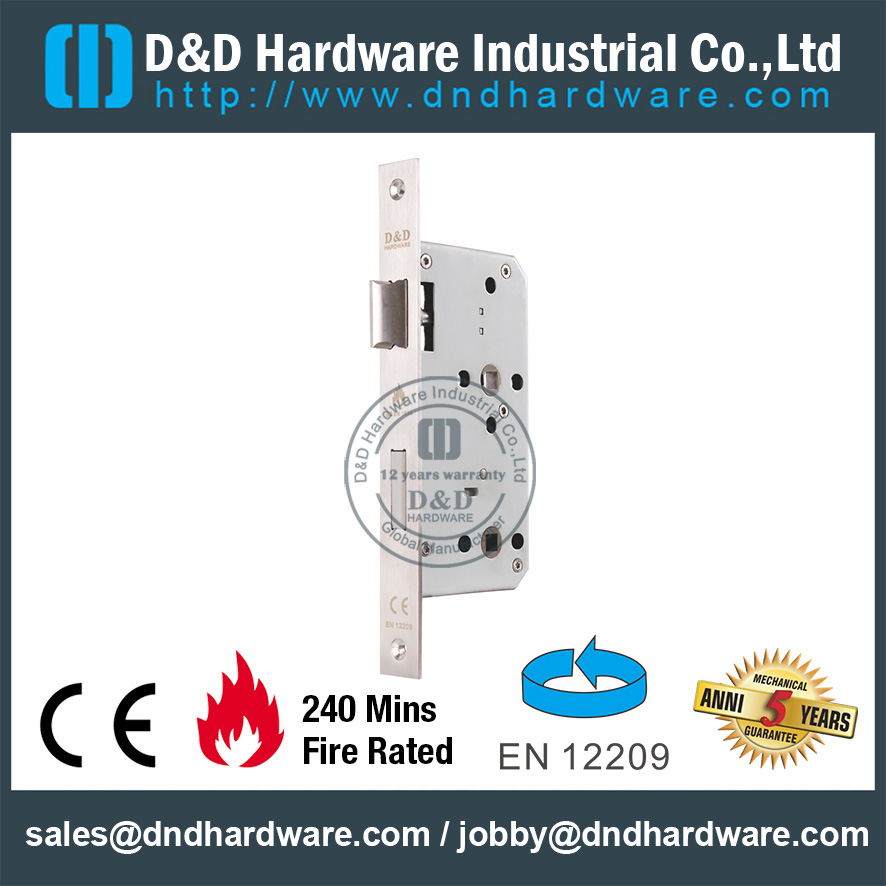 The roller bolt Euro Dead Lock- Roller bolt can be automatic close on either side.

Deadbolt thrown and retracted from one or from both sides depending on the type of cylinder installed. Cylinder action will operate deadbolt. Deadbolt 2-turns. The less the ball protrudes, the lighter the door closing force. 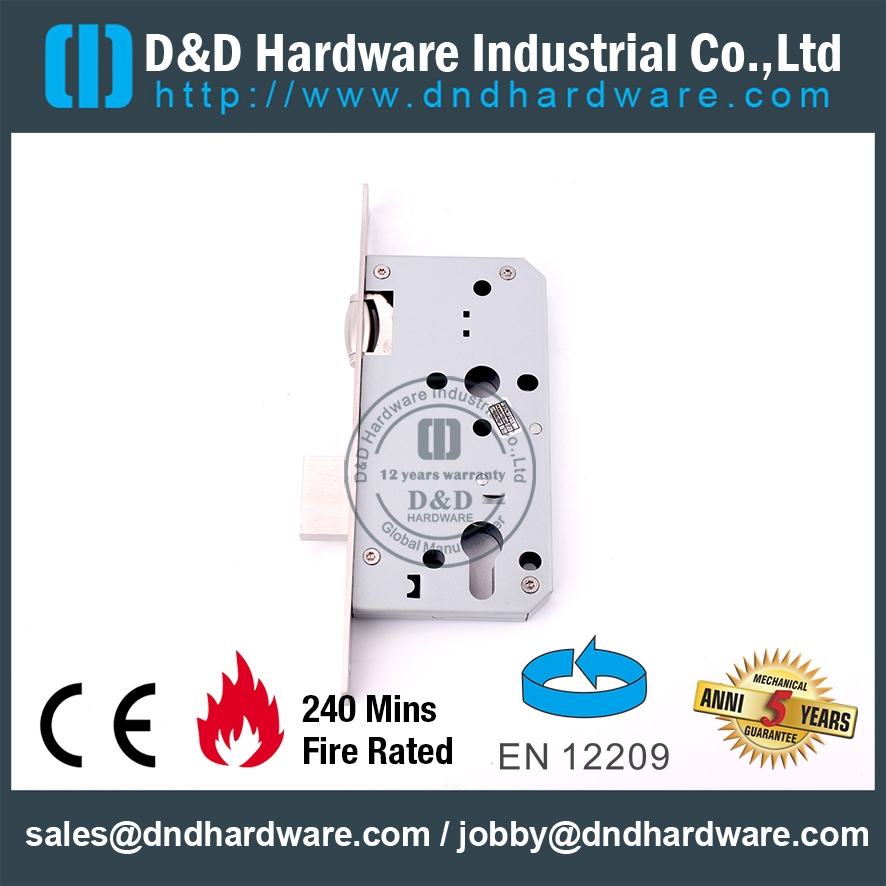 The night lock - latch bolt operated by lever handle or key. Suitable for doors where single action of escape is required. The door will be relocked automatically when it closes and the security will be ensured. Night Latch Lock is usually installed on wooden and glass paneled doors and common entrance doors in family homes. 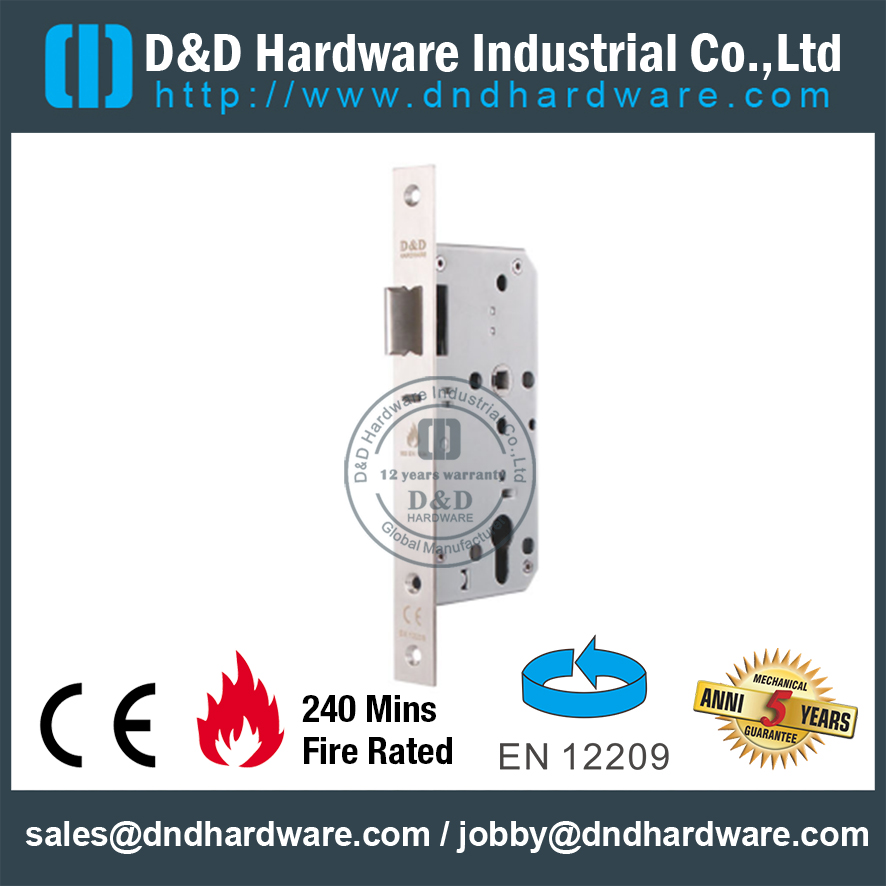 Classroom door lock - a half lock cylinder is provided outside the door, and the lock core cannot drive the oblique tongue. latch bolt retracted by lever from either side unless outside is locked by key. Unlocked from outside by key. inside lever always free for immediate exit. Usually installed on the classroom door. 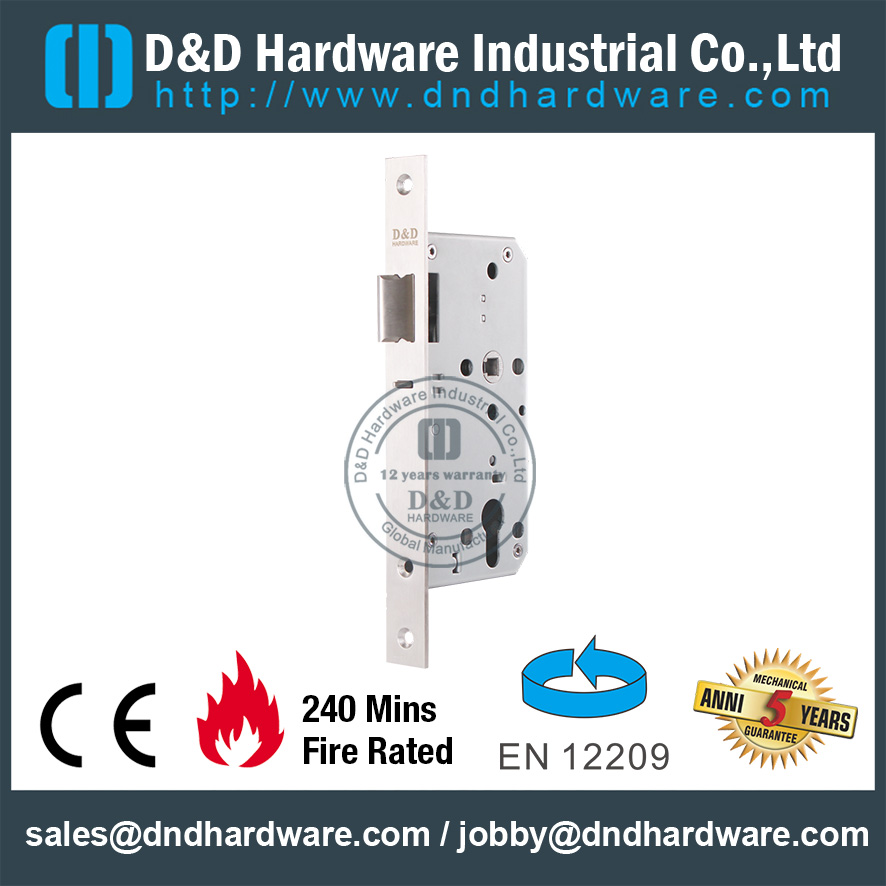 If you want to know more about the door matching scheme of the European mortise lock, you can click here.